It has been awhile since BMI last filed an infringement lawsuit in Indiana. Their target this time around is The Verve, a music club and cocktail bar in Terre Haute, Indiana.

BMI allegedly reached out to the Defendants over sixty (60) times since March 2018 in an attempt to sell her the required public performance license. Accordingly, BMI now brings a lawsuit with 6 claims of copyright infringement based on the following playlist being performed at The Verve without a license on April 29, 2019:

These BMI lawsuits never end well for the venue, so hopefully a federal lawsuit will finally get the Defendants’ attention and an appropriate license can be purchased to resolve the conflict.

The Defendants, a Florida husband/wife marketing team, are accused of purchasing digital artwork from Plaintiff’s Etsy site and then selling it on their own website as their own work and intellectual property. The Plaintiff is an artist from Guilford, Indiana (home of the historic Guilford Covered Bridge). In addition to Plaintiff, the Defendants are alleged to have used artwork from numerous creators without authorization.

The Defendants’ own Terms of Use from their website are referenced in the Complaint (below) as evidence of their understanding (and thus willful violation) of copyright law. The Defendants are further alleged to have removed the metadata from the Plaintiff’s image files, which could support a claim of “Removal or Alteration of Copyright Management Information” although that wasn’t included in the initial Complaint. The Complaint also details unsuccessful attempted communications between Plaintiff’s counsel and the Defendants.

Damages for willful copyright infringement can be severe, up to $150,000 per infringement. If the Defendants are truly serial infringers as alleged, the Court could easily decide to grant the maximum damages award. The Defendants could also be required to pay Plaintiff’s costs and attorneys’ fees, likely a hefty amount in itself.

The plaintiff in this copyright lawsuit is a professional photographer who has taken several photographs of Indiana Pacers’ Lance Stephenson, including photographs of Stephenson winning the 2008 Public School Athletic League as a high-schooler with Abraham Lincoln High School in Coney Island, New York.

Stephenson allegedly posted several of the plaintiff’s photographs on his Instagram account, stephensonlance, without authorization from the plaintiff. Most of the postings were apparently posted in Stephenson’s “Instagram Stories,” which disappear after 24 hours.

Lance Stephenson isn’t the first public figure to be sued for posting unowned photos of themself on social media. Being the subject of a photograph does not grant you copyright ownership of that photograph. Copyright ownership is held by the photographer, who can thus control how the photograph is publicly displayed. These types of lawsuits are typically settled out-of-court, but obviously not in this instance, although the Complaint (below) makes no mention of attempted settlement negotiations. Nevertheless, settlement usually follows shortly after a complaint is filed, although usually at a higher settlement amount.

Here’s an interesting lawsuit, which seems like it wants to be a patent lawsuit but instead is masquerading as a breach of contract or trade secret lawsuit.

In September 2016, the parties allegedly into a “Product Lines Purchase Agreement,” by which the Plaintiff purchased “all specifications, shop drawings, blueprints, records and intellectual property rights” relating to the Kiser DragMaster and Kiser Edge, equipment used for grooming and maintaining equestrian arenas.

Despite selling the intellectual property for those products to Plaintiff as a part of the deal, the Defendants are now accused of selling knockoff products, although under different product names. It seems that what Plaintiff really wants to do is prevent the sale of competing products, but they don’t have any patents to truly protect their product designs. As such, the Plaintiff’s lawyers had to get creative and try to bring breach of contract, trademark, and trade secret claims.

Apparently, representatives of the Defendants have referred to the Defendants’ products as a “redesign” of Plaintiff’s DragMaster. Even if true, the Defendants could claim a nominative fair use defense, as such references seem to actually be referring to old DragMaster products. The law around comparative advertising is pretty well-settled in favor of consumer knowledge, absent evidence of false endorsement. Competitors comparing a new product to an older competing product via name is typically allowed.

By way of example, the Complaint (below) contains the following diagram comparing the Defendants’ “Kiser 1000” to the Plaintiff’s “ABI DragMaster”:

These are the types of comparison drawings you’d typically see in a patent lawsuit. All of the features being compared are utilitarian product features. The product names (i.e. trademarks) aren’t compared because they aren’t similar at all…Kiser 1000 vs. ABI DragMaster.

Proving a breach of contract or misappropriation of trade secrets will necessarily depend on proving that the Defendants’ products are actually infringing on the intellectual property owned by Plaintiff. Without any prior patent protection, that could be difficult to do in this context.

Stay tuned to see how the Defendants respond, perhaps with a Motion to Dismiss for some of the claims.

An Indianapolis company has been accused of selling counterfeit LED lighting fixtures.

Electra Display, on Indy’s southeast side, has been sued for copyright infringement based upon the alleged copying of the plaintiff’s intellectual property, including copyrighted images from plaintiff’s sales brochures, and false advertising, based on Electra’s use of the images to deceive customers into believing that it sold plaintiff’s products, when Electra is alleged to actually sell an inferior, knock off product made by a Chinese manufacturer. 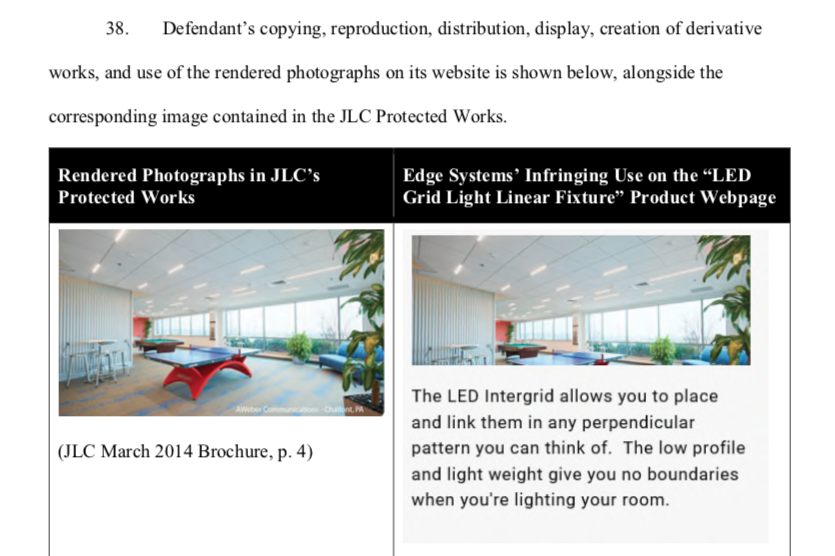 The plaintiff, Massachusetts-based JLC-Tech LLC, owns several patents for its LED lighting technology, but doesn’t assert any patent infringement claims in the Complaint (below). Rather, this lawsuit simply seeks damages and injunctive relief against the use of the sales photographs and misleading advertising.