Here’s an interesting lawsuit, which seems like it wants to be a patent lawsuit but instead is masquerading as a breach of contract or trade secret lawsuit.

In September 2016, the parties allegedly into a “Product Lines Purchase Agreement,” by which the Plaintiff purchased “all specifications, shop drawings, blueprints, records and intellectual property rights” relating to the Kiser DragMaster and Kiser Edge, equipment used for grooming and maintaining equestrian arenas.

Despite selling the intellectual property for those products to Plaintiff as a part of the deal, the Defendants are now accused of selling knockoff products, although under different product names. It seems that what Plaintiff really wants to do is prevent the sale of competing products, but they don’t have any patents to truly protect their product designs. As such, the Plaintiff’s lawyers had to get creative and try to bring breach of contract, trademark, and trade secret claims.

Apparently, representatives of the Defendants have referred to the Defendants’ products as a “redesign” of Plaintiff’s DragMaster. Even if true, the Defendants could claim a nominative fair use defense, as such references seem to actually be referring to old DragMaster products. The law around comparative advertising is pretty well-settled in favor of consumer knowledge, absent evidence of false endorsement. Competitors comparing a new product to an older competing product via name is typically allowed.

By way of example, the Complaint (below) contains the following diagram comparing the Defendants’ “Kiser 1000” to the Plaintiff’s “ABI DragMaster”:

These are the types of comparison drawings you’d typically see in a patent lawsuit. All of the features being compared are utilitarian product features. The product names (i.e. trademarks) aren’t compared because they aren’t similar at all…Kiser 1000 vs. ABI DragMaster.

Proving a breach of contract or misappropriation of trade secrets will necessarily depend on proving that the Defendants’ products are actually infringing on the intellectual property owned by Plaintiff. Without any prior patent protection, that could be difficult to do in this context.

Stay tuned to see how the Defendants respond, perhaps with a Motion to Dismiss for some of the claims.

We’re back! Due to the coronavirus, trademark and copyright filings have been fairly nonexistent for the last six months. But things are picking up again and the Indiana Intellectual Property Blog is back in action to monitor and review intellectual property filings in Indiana.

This case involves a dispute between co-owners of an online instruction course about canine behavior modification. The defendant, a well-known canine trainer, appears to be caught with the plaintiffs in a dispute over her percentage of profit for her contributions to the plaintiff’s series of online instruction courses and canine behavior modification manuals.

It’s always unfortunate when a closely-held business results in a legal controversy between co-owners. The copyright and trademark claims in this case seem to just be leverage for the plaintiffs toward getting their intended result rather than anything particularly interesting for intellectual property practitioners.

The Defendants allegedly operate an entity in Bloomington, Indiana called Functional Family Therapy Associates, in violation of Plaintiff’s registered trademarks. One of the Defendants, Sexton, was previously a member of Plaintiff’s organization. More detailed facts are set forth in the (redacted) complaint below.

This lawsuit arises from a breach of contract and the Defendants’ false advertising, unfair competition, and service mark infringement resulting from Defendants’ unauthorized use of Plaintiff’s registered and common law intellectual property rights in Plaintiff’s unique and original family therapeutic services protocol and Plaintiff’s development, testing, training, and marketing thereof.

An unredacted Complaint was filed under seal pursuant to a confidentiality obligation in an agreement between the parties.

Two photography cases, including one from serial filer Richard Bell, and a breach of franchise agreement lawsuit…other than that, the February Indiana IP litigation docket was totally dominated by filings by RooR International. RooR’s defendants are Indiana smokeshops and their alleged sale of counterfeit bongs.

RooR markets itself as “the premier manufacturer of glass water pipes by emphasizing the brand’s unwavering use of quality materials and focusing on scientific principles which facilitate a superior smoking experience.”

As you can see from the screenshot below, RooR International has gone on a recent filing spree to combat the sale of counterfeit products: 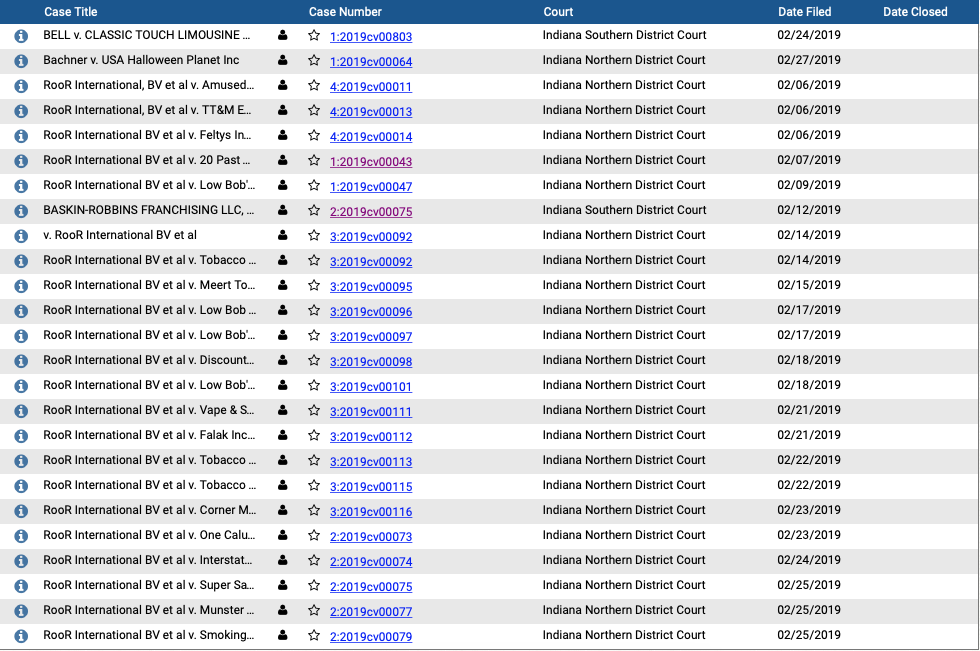 The other non-bong, non-Bell cases involve the breach of a franchise agreement and the unauthorized use of a photograph of a New Year’s Eve fireworks display.

The Complaint alleges that “Carrington had given students copies of confidential and proprietary NFPT examinations, and then quizzed students on the copied examination questions until students memorized the answers to each specific question.”