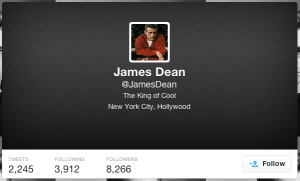 Here’s a potential Giant of a lawsuit.

Plaintiff, James Dean Inc., wants the @JamesDean Twitter handle. Somebody else has been using the Twitter handle since 2009 as a fan account for the Fairmount, Indiana-raised rebel movie icon. The @JamesDean account has more than 8,200 followers and has sent over 2,200 tweets. CMG Worldwide, the exclusive licensee of James Dean’s name and likeness, unable to convince Twitter to hand over the account, are now suing Twitter directly in federal court to force compliance. Twitter looks set to put up a full defense rather than subject themselves to an onslaught of username complaints.

Stay tuned for what will likely become a precedent-setting case for dead celebrity Twitter handles.