The Wall Street Journal has a nice article re: band names and trademark law.

Between takes in a recording studio, Mr. Jones brainstormed about names with his new band mates, including former Nirvana drummer Dave Grohl, then checked them online. Their first choice, Caligula, turned up at least seven acts named after the decadent Roman emperor, including a defunct techno outfit from Australia. Eventually the rockers decided on Them Crooked Vultures. The words held no special meaning.

“Every other name is taken,” Mr. Jones explains. “Think of a great band name and Google it, and you’ll find a French-Canadian jam band with a MySpace page.” 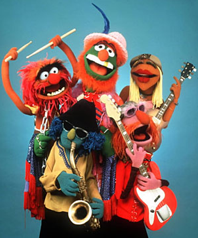 4. Dr. Teeth and the Electric Mayhem

What are your favorite band names?