Over two years later, the Kustom Koozies case is over.

Norwood Promotional Products is a large Indianapolis-based promotional products company which sells imprinted “insulated containers for beverage cans” under the KOOZIE® trademark. KustomKoozies, LLC (“Kustom”) is an internet retailer that sold insulated beverage can and bottle holders with customizable promotional imprinting, directly to end-customers in quantities as small as a dozen. On May 15, 2007, the USPTO issued a trademark registration to Norwood for the mark “KOOZIE®” (see abstract below). On May 6, 2008, Norwood sent a letter to Kustom indicating that it had come to Norwood’s attention that Kustom was in violation of the licensing agreement the parties had previously discussed because Kustom failed to set out KOOZIE in all capital letters and set forth the appropriate subscript following the term. In response to the May 6, 2008, letter, defendant Robert Liddle reviewed the agreement and Kustom’s website pages, making changes that he believed cured any noncompliance issues, but he did not succeed in making all necessary changes. Norwood sued for breach of contract and trademark infringement. 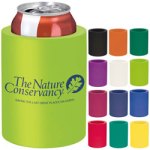 After the lawsuit was filed, Kustom did not attempt to make any changes to its website in order to avoid the trademark infringement claim, but it did attempt to terminate the licensing agreement with Norwood. However, the attempt to terminate was unsuccessful. The Court found as a matter of law that the settlement and license agreements were valid contracts between the parties and that Kustom breached those contracts by purchasing, owning, registering or operating internet domain names that contained the term “koozie,” and by using the term “koozie” or “KOOZIE” to describe and sell products on those internet sites. The Court also found that the mere use of the claimed mark after the failed attempt to terminate the license agreement did not constitute trademark infringement and grant summary judgment to Kustom.

Practical Lesson: Think twice before you commence litigation. It can be timely (almost 2 1/2 years here) and expensive. However, trademark owners have a legal obligation to police and enforce their trademark rights, often putting owners between a rock (losing their trademark) and a hard place (expensive litigation).