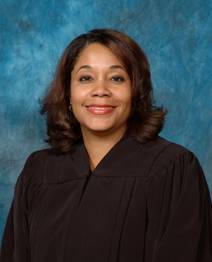 The United States District Court for the Southern District of Indiana is pleased to announce that on June 25, 2010, the Honorable Tanya Walton Pratt took the oath to become a United States District Judge. Chief Judge Richard L. Young administered the oath at the Birch Bayh Federal Building and United States Courthouse in Indianapolis. Judge Pratt’s family, friends, and numerous court staff filled the courtroom to witness the historic event.

Judge Pratt is the first African-American to be appointed to the U. S. District Court for the Southern District of Indiana and the first African-American federal judge in the state of Indiana. President Obama nominated Judge Pratt on January 20, 2010, and the Senate, by a vote of 95-0, confirmed her on June 15, 2010. President Obama signed her commission the same day. She fills the vacancy created by the elevation of Judge David F. Hamilton to the United States Court of Appeals for the Seventh Circuit.

From 2008 until her appointment to the District Court, Judge Pratt served as a judge in the probate division of the Marion Superior Court. From 1997 to 2008, she was a judge in that court’s criminal division, where she handled major felony cases.

Before becoming a Superior Court judge, she was active in private practice with the firm of Walton & Pratt, focusing primarily on family law, bankruptcy, and probate law. Judge Pratt was also a contract county public defender during her years of private practice.

Judge Pratt is active in the Indianapolis and Marion County bar associations and in 2005 was Chief Justice Randall Shepard’s appointee on the Indiana Sentencing Policy Study Commission. She was a member of the Marion Superior Court’s Executive Committee and Chair of the Dr. Martin Luther King Holiday Commission in Indiana from 2001 to 2007.

Judge Pratt received her B. A. from Spelman College in 1981 and her J. D. from Howard University School of Law in 1984.